A Challenge Worth Taking

John joined the Edge with his wife Margaret on a recommendation from Margaret's sister Joyce who was already signed up for the Edge Challenge. John and Margaret came in to their Challenge strategy session like most other people. He and Margaret were saying all the right things, but signing up and talking a big game is the easy part. John's doctor had been telling him that he really needed to lose some weight for several health reasons and he was ready to do just that. Over the years, both John and his wife had packed on the pounds. They own and operate the S.S. Chowder Pot III in Branford and John goes by "Chef John." The menu consists of primarily steak and seafood and while working long hours in the food industry, John was eating what was available to him. John hadn't belonged to a gym before so the whole experience was pretty new, but he set his goal to lose 40 lbs and committed himself to it. 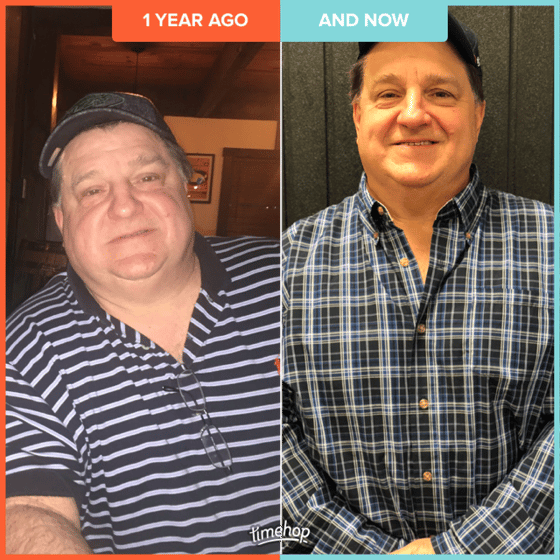 Preparing for the Challenge

John knew that nutrition was his biggest opportunity. We took his InBody scan and used the DotFit software to determine how many calories and macros he needed. We then built his meal plan around that. John just wanted to know what to eat, but he appreciated the time we took to explain 'the why' behind what he was supposed to eat. John also knew he had a lot of holes in his nutrition so he took full advantage of the DotFit discount and got everything that was prescribed to help him to reach his goal of losing 40 lbs.

John ate one last loaf of bread on his way to the Edge Challenge kickoff as he knew that was a major culprit of his current physical state and was no longer going to be a staple food in his diet. He and his wife came to the kickoff party ready to listen to the advice that Brian was going to give about eating and exercising. John also was excited to not be going at it alone as his wife, sister in law, and niece were all on his challenge team. That night very few people knew who he was. John went on stage and stated his goal of 40 lbs and then wrote it on the poster to see each day in Strong Class. He was ready to kick off this journey!

----Nutrition
John's meal plan consisted of eating a wholesome breakfast that was high in protein and had the bulk of his carbs for the day, which was usually eggs and oatmeal. John started snacking between meals on healthy snack options. His go to meals at work changed drastically to a lot of veggies and fish or chicken, a big change from the pastas and big juicy steaks he was used to eating. John got himself more organized so he was taking his vitamins and other supplements at the right times and consistently. When asked what his biggest challenge was, he said the eating because of all the food he's surrounded by all day. When asked what made the biggest difference, John exclaimed, "drinking 7+ bottles of water per day, my best friend was the urinal!" We both got a good laugh out of that, but in all seriousness, proper hydration does so much for the body that you don't even realize until you actually do it on a consistent basis. John continued with cutting the bread and sweets, which he realized made sticking to everything else that much easier. After the challenge, John had a cheat meal, but said it really just left him feeling uncomfortable. His body has changed since those foods weren't the norm for him and now he can feel the difference when he eats something that's not quite healthy.

----Exercise
For workouts, John started the Challenge by coming in with Margaret once a week and training together with me as their trainer. We focused on a lot of mobility exercises at first and stabilization exercises of joints as both were new to working out. As the weeks passed, we spent more time with strength training and higher intensity circuits. John added a 6 pack of sessions, further throwing his hat in the ring to compete for the win, so that we could train at least once per week together. By the 7th week, John was ready to sign up for monthly recurring personal training and keep his new habits rolling. He never passed up an opportunity to push himself and get better. On top of 1x per week personal training, John became a staple in Edge Strong Classes taking classes everyday to start, then tapering down to 5x per week. John is maintaining himself with 3x per week plus one day per week personal training currently. John went from just another face at the kickoff to the Celeb status at the gym. Each day he strolls in with his Jets jacket, hat and gym bag on his shoulder wearing the biggest smile on his face and waving to all his new friends that he's made at the club. Every trainer knows his name and loves having him in class. Ask any trainer around the gym about John and you'll hear things like "hard-worker" and "always happy." John is never too busy for his friends at work either. He knows when his gym friends show up at Chowder Pot and he comes right out of the kitchen to say hi and thank them for coming down.

John made it to all 8 Challenge workouts, but had to sit out the better part of a week due to a strained back. He was still there to get stretched out and learn about how to overcome it so he could get back to it. His favorite things are running, rowing, and Jacob's Ladder. John was a standout member of Team Bubbles for the Edge Challenge, but he was everyone's
biggest cheerleader. He constantly would encourage those around him while he did his exercises.

As the Challenge concluded, John missed his goal by less than a pound, losing 39.6 lbs. But what he gained was far more valuable than a new wardrobe and new friends. John proved to himself that he was able to completely change his life in a matter of weeks. He has been a huge inspiration to his family, friends, co-workers, and everyone who knows him. John ended up finishing in 5th place at the Hamden Edge and although he would have loved to win, he said doing what he did surrounded by his family was more than he ever could have hoped for and he wouldn't trade a bit of that for 1st place.

Future Goals
Short term goal is to go get all new clothes since his old clothes don't fit anymore. John wants to lose another 20 lbs. He's sticking to his nutrition and 3x per week attending Edge Strong classes in addition to his Personal Training.