Karen's Journey of Following Her Heart

Many of you have had the privilege of meeting Karen Ryan. She has been working at The Edge Fitness Clubs for 16 years. She is the CT-Regional Group X Manager and a Group X Instructor and is fiercely passionate about fitness. Anyone who has attended one of Karen’s group classes can attest to how her passion truly drives her classes and love for her students. What many of you may not know is that Karen has had her fair share of struggles throughout her life and her fitness journey.  A warrior is defined as “a brave or experienced fighter”. Karen Ryan is a warrior. No matter what life has thrown her way, she has kept moving forward, all with a smile on her face. Keep on reading to hear her amazing story. 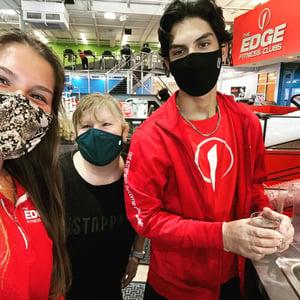 “I taught my first step class at the age of 16 and I’m thrilled to say I still teach group classes today - 39 years later.” In 1998, a few months after Karen’s daughter was born, she began having what she thought were panic attacks. Her primary care physician ordered an Echocardiogram and it was discovered that she had mild stenosis and regurgitation of the mitral valve. The mitral valve is a valve that lets blood flow from one chamber of the heart, the left atrium, to another called the left ventricle. “I knew this wasn’t a death sentence, my doctor prescribed a beta blocker to help reduce blood pressure and I went on living a normal life.”

Fast forward to September 2001, Karen was co-chairing a fundraising event and wasn’t feeling well – “I just thought it was the stress of the day”.  The next day, she woke up to a massive migraine but her priority was to get up and go teach her Group X Class. “I suddenly couldn’t form sentences and thought –oh my God, I am having a STROKE. I was experiencing what was later discovered to be Atypical Migraines.”

In November 2001 of that same year, at the young age of 36, the time had come, Karen needed to have her mitral valve replaced. After consulting with the surgeon, he suggested she have an artificial St. Jude valve due to her age. He also suggested that she look for a new field to work in as she would not be able to keep up with the physical demands of teaching fitness classes and running a gym.

While the surgery was a success, a few days later, Karen experienced a heaviness in her chest. She thought it was just part of the healing process. At her follow up, she had an Echocardiogram, it was discovered that she had a large fluid sack around her heart and lungs. She needed to have a pericardial effusion. “I overheard the conversation between the doctors and knew that this was serious, it was a matter of life and death.  If the sack ruptured that was pretty much it. I remember the ambulance ride to the hospital took forever. The ambulance had to go slow to avoid any extra movement.  I arrived at the ER, the surgeon was waiting and ready to go in the OR.  In ICU for 4 days, 7 days later I was going home. I survived.  When I was discharged, I was told once again that perhaps I should look for another career.”

But come January 2002, two months after her surgery, Karen was ready to return to teaching Group X classes – STEP!!! “I was thrilled to be back in action, but deep down was scared.  Such an amazing group of members showed up for my “Welcome Back Party” – they cheered, they cried, it was incredible! During the class, I noticed someone looking into the studio…I didn’t think much of it because the squash court was directly across from the studio. The person looking in was the SURGEON, the very one that had just told me I should look for another job! We briefly spoke, he shook his head and said “you are truly a miracle”. I will never forget that day.” 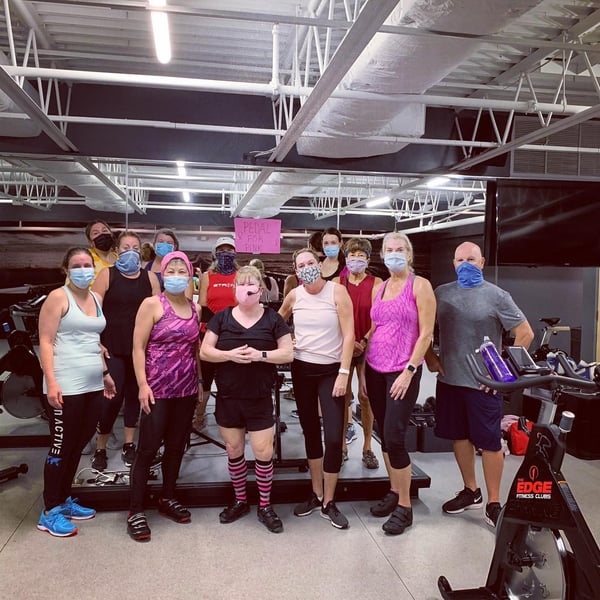 Now if that wasn’t enough, 18 months later, Karen was a faced with another cardiac event –   “I remember I was waiting for a cardiac catheterization, they wanted to get a better view of my heart.  I overheard the cardiologist say, “she looks too healthy, we are not going to find anything”. After a few hours, it was my turn to go into the cath lab – once again angels watching over me – I heard the doctor say dissection of the left coronary artery. So, they put in a stent and I was good to go.”

Things happen in life that are beyond our control. It’s how we chose to handle them that defines us. Karen would not let her heart stop her, that was until she had another cardiac event 10 years later. “I knew something was wrong and I was worried. My doctor for over 20 years was concerned. I knew then that I had to slow down, as there was irreversible damage to the heart muscle. Months later, I received a call from my doctor– he suggested I get AICD (Automated Implantable Cardioverter Defibrillator). He told me to look at it as a “life insurance policy.” I was never told to stop teaching group fitness classes.  Many said that working out and teaching Group X classes is what has kept me alive all these years. “don’t stop now” I was told.

I am a survivor and have an incredible team of guardian angels. I feel beyond lucky to have lived through all of that and to still be teaching group fitness classes to this day. Fitness and Group X Classes are and will continue to be an important part of my life. I believe that being fit and teaching group classes saved me even when the odds were against me. This is my passion and I will be doing this until I can’t anymore. I’ll be seeing you in the Spin Studio!” -Karen Ryan

We are so grateful to have someone like Karen Ryan as a part of our Edge family and teaching in our studios! She puts her heart and soul into her role here at The Edge, and she loves all of her students. We believe it has been her passion that has gotten her through all her obstacles. We're glad she followed her heart... she is an Edge miracle and is still teaching to this day!