"I was diagnosed with Polycystic Kidney Disease (PKD) in my mid 20’s. PKD is a hereditary disease in which clusters of cysts develop in the kidneys that eventually impeded normal kidney function leading to dialysis or a kidney transplant. There currently is no cure for this disease. Once I received my diagnosis, I had annual ultrasounds and frequent bloodwork to monitor my kidney condition. Many people with this condition usually have kidney failure by age 60 so I considered myself very lucky to not have had any kidney issues until my late 50’s.

In August of 2013 my primary care doctor mentioned the need to start preparing for dialysis and I began seeing a nephrologist. I was stunned since I actually felt very healthy. My nephrologist had treated my father so I felt very comfortable with him. We discussed my options and he didn’t feel I had to prepare for dialysis right away but we would monitor the bloodwork closely. I was currently working as a principal in Bridgeport and I loved my job but at that point I decided I would retire from work in June of the following year. I had 36 wonderful years in the Bridgeport School System but I felt if there was a possibility of being tied to a machine three days a week for the rest of my life I was going to travel to as many places I wanted to visit while I still could. I also researched that eliminating stress, massage therapy and a healthy diet and fluid intake helped ease the progression of the disease. I wasn’t really ready to retire because I loved my students, parents and teaches but I retired in June of 2014.

My husband and I went to Ireland for my retirement trip. I began massage therapy, adhered to a low sodium diet and began drinking gallons of water. We went to the Canadian Rockies, on a Danube River Cruise, Puerto Rico, Oregon and Florida. Finally in October 2017, my kidney function numbers began to drop precipitously. I had joined the The Edge Fitness Clubs and was working out fairly regularly though not as much as I should have. Up until this time I hadn’t told anyone but my husband about my condition but I began to do so since I was now trying to see if I could find a kidney donor rather than go on dialysis. Everyone was shocked because I was so active and didn’t look sick. Many friends and family called Yale to donate but were not compatible. I was touched and humbled when 2 parents and a teacher from my school offered to be tested to be my donor! The teacher was a potential viable donor but she had to lose weight so she also joined the The Edge Fitness Clubs to start a workout program. Unfortunately she developed breast cancer and could no longer be my donor. My nephew went on Facebook and found a woman who knew him when he was growing up in Atlanta. Once she saw his post she immediately responded that she would be my donor. We were stunned that someone would see a Facebook post and choose to donate a kidney to a stranger. We found out that she was a perfect match in April of 2018.

At this time, I got serious about working out and trying to get into the best physical shape I could be before the surgery. I joined the Edge Challenge that spring and began working out with my trainer, Therese Jositas. Therese was and is the perfect coach for me. She understood my issues and adjusted my workouts accordingly. The goal for the 2018 spring and fall Edge Challenge was twofold - get in shape for my nephew’s wedding and also for a kidney transplant in October of 2018. Therese and I worked very hard and things were going along really well. Then I fell in the kitchen and the next thing I knew I had completely torn my hamstring from the bone. I had to have surgery and the transplant was postponed since I had to be completely healed to proceed. Finally I had the kidney transplant on February 5, 2019. The surgery was a success and I thank God for my altruistic donor every day. Leslie, my donor, stated she wanted to know she made a difference in life and donating her kidney to me was a transformative experience for her.

By April I was back in the gym but I was taking it rather easy. Therese always came over when she saw me in the gym to give me pointers and encourage me along the way. I joined the Edge Challenge again with Therese in February of 2020 because I had another wedding to go. Plus it was a year since the transplant and I felt more confident about pushing myself a little harder. Everything was going great until the virus hit us and the gym was closed. I must commend Therese for keeping in touch and sending exercises and encouragement on a daily basis. Once the gym reopened, Therese reached out to me to come take a tour to see if I felt safe with the sanitary precautions The Edge was taking to ensure the gym was safe. I was very concerned since I am so immunocompromised but Therese proved to me it was a safe environment and I could return to the gym. Everyone at The Edge has been so positive and supportive. Tyler has made adjustments to my Edge Strong schedule since I was really hesitant about taking clases with other people. Little by little I have been getting back into the routine of things at The Edge and I am grateful for all the support and encouragement I have received from the staff and especially Therese. Thank you for giving me this opportunity to share my story!😊"
- Helen Moran 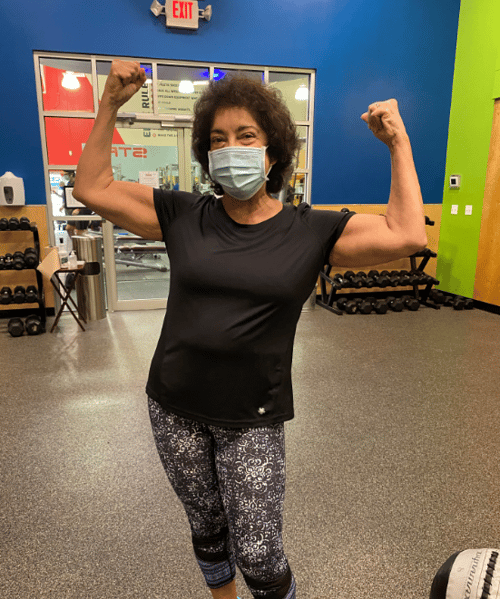