A Letter From An Edge Challenge Winner

Here’s my story on why I did the challenge. 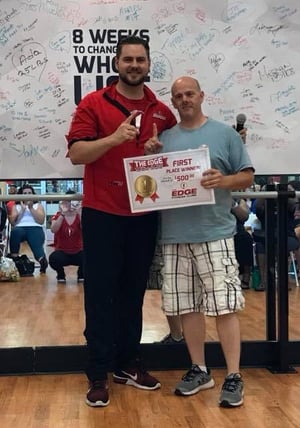 It all started when my Sister in-law mentioned the challenge to me. I looked at her and initially said, "yeah I’ll do it." It got closer to the time and she said, “you’re doing the challenge” and I said “umm nope don’t think so.” So we battled back and forth for days. I also looked at myself and said, “I have a 2 year old that I need to run around with as she gets older.” I found myself eating like garbage; McDonald’s, pizza, and fast food. I was on a bad road. I found myself out of shape and out of breath walking up the stairs, I weighed my heaviest since being out of college and that was 15 years ago.

Boom, I signed up for the challenge. My sister in-law told me I had to sign up with Matt and that he is a great trainer, and that's exactly what I did.

So I’m in the challenge, I had no clue what I was getting into. Matt sat down and wrote a detailed meal plan with what I could and couldn't eat. No creamer in my coffee - substitute for almond milk? No bacon egg and cheese? Anyways, I put the meals together with much-needed help from my sister in-law, Amy. Chicken, broccoli and brown rice, that’s what I lived on for 8 weeks with a little bit of ground meat. Oh, and the Edge Strong classes? I couldn’t move my arms and legs after my first class...for 3 days!

On the opening night of the Edge Challenge, I came in quiet and unsure, like a lot of others. Team Matt was right in front. We waited and listened to all. When it was my turn I gave my weight loss goal of 30 lbs, and sat back down.

I started receiving emails from Matt in regards what to do with meals, and the types of food to eat and what to stay away from. I went to the store and had to ask, “Where is the Ezekiel bread?”  Matt guided me in the right direction. Before I knew it, I started to become a pro at the Edge Strong classes. The more I worked at this, the better and stronger I became, I wouldn’t say it got any easier, but that’s because the stronger I got, the further I was able to push, I attended every Saturday session and loved it. The weekly workouts Matt sent me were great.

I went in thinking I didn’t lose anything; I felt better but didn’t look any different. So after the Saturday session, I weighed in and I lost around 12 pounds. I started thinking, “Wow, I’m really doing this!” Off to work I went with a grin. I continued to work out for weeks; I prepped my chicken, broccoli, and brown rice. And there’s nothing like a boiled egg and Ezekiel bread.

I was still thinking that I was not losing much; I didn’t feel any change, I was eating really well but no visible evidence. The sessions came and went, I weighed in and I saw I had dropped about another 7 pounds. I thought “Nice… still rocking.” Then the rankings came out and BOOM! I noticed I was first on the challenge list!  Another exciting moment, it just goes to show if you put your mind to something, you can accomplish it.

Everyone on Team Matt was asking on Saturday if I was going to weigh in. I told them I would but I wasn’t sure if anything was going to change. Sure enough, much to my surprise there was another change; down another 6 lbs. Wednesday came around and I saw that I topped the challenge boards once again. I felt on top of the world, twice in a row I had been on top. I started to say to myself “Hey, I could win this thing. I’ve gotta work harder.”  As can happen to anyone, I hit a wall, I had some things come up and my energy was low. Matt was the team leader and he told me, “You got this, keep your head high and keep working”. The Challenge became more intense, people were starting to see the change. They were seeing me work hard and even starting calling me an animal. I severely increased the amount of push-ups I could perform, I felt better than ever and was even running up the stairs with my daughter before bed.

4th and final weigh in:

At the closing of the Edge Challenge, Matt came up to me and said, “Man this is close, you need to focus hard and you got this.” So the day of, I took it off from work to relax and focus, I worked out twice that day, went to locker room, sat and relaxed, then I went and got into line. The weigh-in was intense; everyone was saying I had one competitor that might be close to beating me. To my surprise, Matt told me that I had to weigh in in my boxers only! That’s how competitive it was. So by the time it was my turn to weigh in, Matt gave me a few last minute tips and I saw the scale. I had dropped to a weight of 172.5. WOW! But how did we do? Others weighed in and it was a close challenge. We listened to all Matt had to say. The 3rd place winner was announced, then 2nd place, with a weight loss of 18.4, and then the King himself, from Team Matt,  Dan Smith with 1st place with a loss of 39.5 lbs.

Never would I have thought that I could get to that weight, I did it by working hard, and it showed. I beat the Hamden challenge and was top 16 in the entirety of the Edge Challenge in all locations. I walked with my head held high. All I wanted that night was a pizza and a beer. Thank you Dimatteo’s pizza for the beer while I waited for my chicken bacon ranch pizza.

In conclusion, I could not do it without the convincing from Amy, my team coach, King Matt, and The EDGE Fitness Clubs. Now every night before bed my daughter and I walk up the stairs and at the top we say, "we made it." To this day I still work out every Monday night with Matt as my personal trainer. I am participating in the next challenge with a weight loss goal of 15 lbs and gaining muscle.