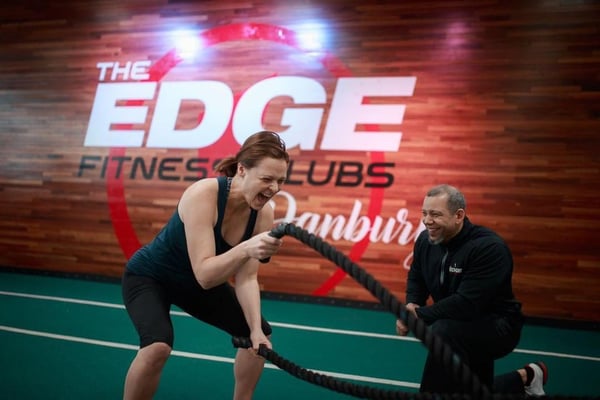 Meet Megan (she does stuff *Instagram). Megan is a busy Mom and High School teacher, as well as a great friend. So, when her friend asked her to join The Edge 8 week weight loss challenge to support her, Megan signed on. Our first session (a strategy and goal setting session) she decided to not just show up for her friend, but use this time to get back to a healthier, more fit lifestyle.

And so, it begun:

We set up a sound plan that we both agreed on first. It’s of the upmost importance to not just have a plan, rather a plan you can commit to that makes sense for your life. You want to be able to make things sustainable and that was our aim. Through our dotFIT software we built workouts that have great demonstrations, nutrition guidance and supplement recommendations based on her goals as well as health and fitness history.

The personal fitness program is just a part of our “Total Fitness Solution”. 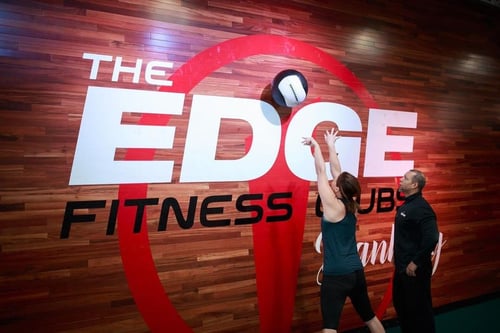 Next, we got involved with like-minded people to create a positive community which is where the magic happens at The Edge! If you stay on the outside of the pack, it’s easy to become the prey of our overly convenient world that all too often catches many people on any fitness journey, whether it be weight loss, muscle building, cardiovascular health etc. However, when you position yourself in the middle of the pack, you are surrounded by so much positive influence the snakes are more easily identified and avoided. This may have been the biggest thing for Megan as she states in her growing testimony.

The results from the 8 week challenge were pretty awesome as Megan actually was awarded third place out of over 200 participants who ALL did an amazing job. She did by losing well over 13% of her entire weight. Though that is awesome and deserves celebration, the bigger prize is that she is still going “Strong” (pun intended) which was the real goal. Beyond proud of Megan and can’t wait to see her continue to thrive in this awesome journey of health and fitness.

A brief how this came to be:

I did the challenge because a friend of mine was going to do it and she really wanted me to also do it to support her. I did have the need to get back into a fitness routine and lose some weight so I agreed.

At the beginning of the challenge I definitely did not have the endurance or strength that I was able to build by the end. I also was more easily able to do very routine cardio like treadmills and ellipticals, by the end. I had progressed to a point through the strong classes and working with Geams to use machines and free weights and lift much heavier weights. It all came from an increase in my confidence.

I was able to increase my endurance to the point that I am running longer distances. I learned a lot about nutrition from Geams and supplementing. I've definitely been able to see an improvement in my performance due to these factors. 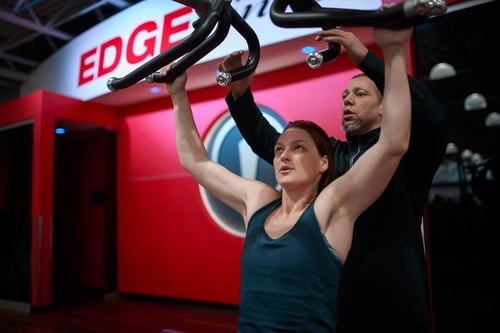 The challenge definitely helped me grow mentally, so much. The body changes that I saw actually were minimal in my mind compared to where I ended up mentally at the end. I did lose 22 pounds and increased my muscle by so much and lowered my body fat. However, I think my greatest takeaway was a change in my lifestyle that continued beyond those eight weeks. I'm most proud of the fact that here I am three months later and I'm still hitting the gym daily and seeing gains.

Since the Edge Challenge ended, I have continued in a fitness routine. What has not always remained is my ability to stay on track with my nutrition, for instance during the holidays I definitely indulged more than I had been during the challenge. The lifestyle change that I had made though as a result of the challenge meant that even with some slips in my nutrition and my daily gym routine, my body changes allowed me to endure. My metabolism is much faster with the added lean muscle I have gained.

It is really important to build a team around you. A lot of people enter into a lifestyle change and they try to do it all themselves, and that's impossible. I'm a teacher and in particular I teach sociology. The importance of social relationships and life success is not lost upon me. So many times, Geams and I would discuss strategies for me to just be successful outside of the gym, like when I would be challenged by the temptations at a social event or vacation. He would set up visual scenarios such as putting an arm in front of me or chairs to act as obstacles so I would learn to keep my eyes on whats in front of my goal. Then having me push it away so that I could imagine that when I might be challenged to move beyond something.

The gym you deserve is waiting for you.